This is another installment of “They Don’t Teach You That in Library School.” Today’s topic: Severe Weather

I’ve worked around here long enough to know that we do annual fire drills at the law school, and in my previous role here as a desk attendant, I was trained in what to do when severe weather strikes, but putting it into practice as a professional is another story.

Fortunately, I’ve not actually been here for a real fire evacuation, but drills are interesting.  For the most part, people are very good about evacuating, but you do get two types of lingerers: the students that know it’s a drill and don’t want to leave because they don’t want to “waste” their study time, and international students that don’t understand what’s going on.  I’m sure they’re quite alarmed/confused seeing the librarians racing through each floor of the library, ushering people out.  And of course, it’s not exactly easy to explain the process to them while alarms are blaring in your ears!  Is there a master technique?  I don’t know – I’m up for suggestions.

And then of course, here in Indiana at least, there are tornado watches and warnings.  While with fire drills we are required to get everyone out, with tornado warnings, we strongly urge people to go to the lowest area of the building, but we insist that they at least get away from windows.  If you’re familiar with our Law Library, you’ll know that windows are a key architectural feature for us: 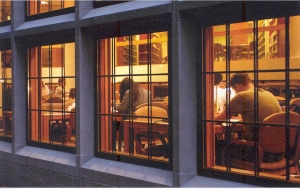 That’s not even the best example – our Reading Room is known for it’s natural lighting, with two-story windows and skylights.  So in the event a tornado, this is not the safest place to be!  The insistence on clearing away from windows during warnings usually goes fairly well, with the obligatory grumbling, but what I’m always troubled with is whether to stop people from leaving altogether.

Today for instance when the first sirens went off I could overhear people saying, “I’m just going to outside and see what it looks like.”  Now, we’ve already warned them of the weather conditions – should we stop them?  On the one hand, of course you want to stop them – there’s potentially dangerous weather outside.  On the other hand, I’m not their mother – do I really have the place to force them not to go outside, or can I only strongly discourage it?  Earlier this year, we had another tornado warning, and we followed our usual procedures of clearing people away from windows, telling them where they should go, but not forcing it; and an international student dropped by later to tell us that we should have done more, because she and her international friends didn’t really know what a tornado was and hence what the threat was.  Who’s teachable moment is that?  Should we as librarians have known that they wouldn’t know what this was?  Should it have been covered in their orientation?

Again, these are things that aren’t taught in library school.  I guess the best we can do is follow our procedures, explain along the way, and adapt as necessary.

With the weather clearing up for the moment, I’ll take this chance to get home before the next storm myself!